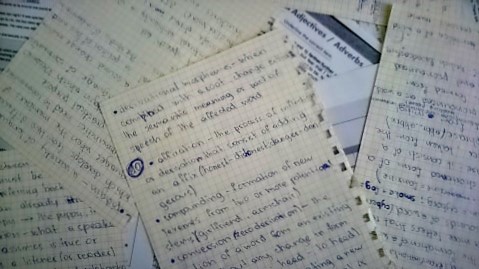 Sleepless nights, constant revisions and frequently refilling your cup with strong coffee. Ah, yes. That is the beauty of exams.

Exam season can be brutal, and I am quite positive that students around the world likely agree with such a statement. To be honest, I have never heard of a student who would openly admit that they actually enjoy studying for exams. Well, Harry Potter’s over-achiever friend Hermione Granger is an exception, of course. I still cannot grasp how she managed to score ten O’s (Outstanding) for her O.W.L exams! Okay, maybe I am going a bit off topic here. Besides, it would be rather unfair to try to compare our academic achievements to something from J.K Rowling’s wild imagination. Not everyone can be Hermione Granger.

So what can we actually do to ensure that we will successfully pass all of our examinations? Cheating is out of the question, we cannot freeze time to study more and faking your own death only to forge a new identity in order to not attend your exam session is a little bit extreme. So what else is left? Do not fret, my friends! In this article I am going to share with you five useful tips, which will help prepare you for your upcoming exams.

STUDY WEEKS BEFORE YOUR EXAM

I am fully aware that this might be a difficult task for some of you. After all, we are human and understandably so, studying is not our only priority in life. Spending time with family, going to work and catching up with friends is just as important. However, it is also crucial to maintain some kind of balance. By failing to achieve the so-called equilibrium, in both studying and your social life, you will undoubtedly struggle. Studying one hour in the morning and doing a thirty-minute revision before going to bed, weeks before the exam might sound like torture. But think of it this way: if you are going to start studying now, you will have less material to worry about later in the future. Of course, there are some instances where some students pass by studying at the last minute. They actually thrive under this kind of pressure. Unfortunately, at the end of the day their results are merely satisfactory and in some cases they actually fail other exams, due to the fact that they had little time left to study for other subjects. Although, working at the last minute to some might sound like something right up their alley, I would personally advise against that. Believe me, once you are going to get accustomed to your study schedule, you will not think of it as an obligation, but as a normal routine of your daily life.

GET RID OF ALL DISTRACTIONS

Distractions are inevitable – especially, when we have to do something that we do not necessarily want to do. Sometimes staring at an empty wall or thinking about what you want to eat can be a thousand times more interesting than studying. I have been there, trust me. But if I had to point out one thing that causes most people to lose focus, it would be technology. You better sit down right now, because you might find yourself quite startled after I will tell you this, so prepare yourself for the impact. Consider turning off your phone. What?! Yes, you read that right. It would be near impossible to focus on your studies with constant buzzing coming from your phone, alerting you about random things every ten seconds. If you have a big exam to worry about, try to break everything into little pieces, and after completing a certain part of your revision, you can treat yourself with tiny rewards. If you are going to learn by heart all crucial dates from an important historical period, read one chapter of a book you always wanted to read. After fully understanding the principle of Occam’s razor, (you know, that problem-solver buried somewhere in your notes that – oh, which class was it again?) chat with your friend for fifteen minutes. Try such an approach next time.

BREAK YOUR REVISION INTO CATEGORIES

Over the years, I noticed that lot of students are genuinely convinced that all schools are mainly about memorization. Although I hate saying this, I believe that there is an element of truth to that statement. Which is rather unfortunate because some people can be quite knowledgeable in certain areas, however if their memorization skills are lacking, then they might have a hard time in the examinations. If you are personally struggling with something similar, I would advise you to focus on a section and break it down into five key facts. So, for instance, if you are going to see the word Puritan, you might associate it with facts such as these:

This may seem like a lot of work, but by breaking things down into smaller sections you can actually see the clearer picture. Of course, this may not work for everyone, but, nevertheless, you should really give it a go. You will never know unless you try.

GET PLENTY OF SLEEP DAY THE NIGHT BEFORE

Sleep is important and I cannot stress that enough. I actually have a little story to tell you and hopefully you will take something from it. My high school friend Sam, who disliked studying for exams, decided that it would be a smart idea to study at the last minute. Whenever my friends and I would study together as a group I would try my best to encourage him to come with us. Unfortunately, he was not an easy person to convince. Two days before our final exam was the day he decided it was finally the time to study. He locked himself in his room, re-read all of his notes from class, purchased a dozen energy drinks and drank them like tap water. This cycle repeated itself for two days. On the day of our examination, he showed up fifteen minutes before we were to be called into the gymnasium, where our exams were held. I noticed that his hair was quite dishevelled, and, to top it off, he had huge bags under his eyes. When I pointed it out to him he admitted to me that he had not slept for two days. My jaw dropped, but before I could reprimand him for his reckless behaviour we were all called in. To this day, I still remember distinctly that I was seated more at the back and Sam was seated at the front, one row to the right. Needless to say, I could see him quite well, hunched over his desk and looking like a zombie.

Every time I would finish answering two questions, I would quickly glance up at Sam to see if he was okay. One minute in, nothing happened. Two minutes in, nothing happened. Five minutes in, nothing happened. Ten minutes in, I kid you not, I looked up and Sam’s face was literally planted on his desk with his arms limping on both sides. He literally passed out in the middle of an exam. The examiners, who were walking around the gymnasium, approached him but they could not do anything because that would be against the rules. They were only allowed to talk to a student in two cases. One, whenever a student raised their hand (for instance, to ask for a spare pen) and two, which is the worst case scenario, if a student was caught cheating. Then they had to ask the student to leave the examination, because they had just been self-disqualified. When the exam was over, Sam was woken up by the examiners. At first, he was very disoriented, but, eventually, he put two and two together when he saw other students handing in their papers. The moral of the story is quite simple: if you do not want to end up like Sam get plenty of sleep.

FIGURE OUT HOW YOUR EXAMS ARE MARKED

This is quite important, because, as I am sure you know, all exams have to follow their marking plan. If you are going to learn that plan, and you will apply it in taking your examination, then you are pretty much half-way there. You should also pay close attention to points the moment the examiner hands you the exam. So, remember, you prep work is not quite yet finished once you open that exam paper. Whenever I finished my exam early, I would re-count all the points to make sure that they added up to the original grading plan. Then if I had even more time to spare, I would re-read all of my answers to the questions and would give myself points in my head, every time I felt sure that  I answered certain questions correctly. So, if I felt sure about forty-eight of my answers, and overall I could have gotten fifty-six marks altogether, I knew that I would most likely pass the exam. This approach might seem a bit excessive, but surprisingly, it can put your mind at ease.

I think we can all agree that examinations can be stressful. Although they are a part of student academic life, most of us find it difficult to handle. Still, I hope that these tips are useful for you. Just remember: read the questions carefully, manage your time and do not forget to breathe. I am not kidding about that last part. I almost forgot to do that in one of my exams.